A Lesson in Black 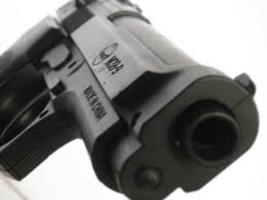 Guiding Question: Have you ever felt unsafe because of your race? Thank you for commenting below to share your experience.

“Here we were, Black and free, unapologetic artists and educators who had to question if the plastic in our hands could cause our immediate demise.  This plastic could result in bullets and blood and the question everyone would ask is, “Didn’t they know better?”

I mentioned in last week’s blog that I produced a short film. I had an amazing time working behind the scenes to cast, secure locations, approve wardrobe, and mind all of the details. The cast and crew were my favorite type of people—easygoing creatives that can get ish done. Saturday morning found us right in the thick of it, in the heart of the hood, shooting a war scene–complete with very real looking toy guns and all. One actor balked when he saw “the weaponry”. “Y’all ‘bout to get us caught up out here with these.” The director shook his head sadly. “At first I wanted to shoot this scene at a playground. Then I thought of Tamir Rice and decided otherwise.” We all paused. The jovial mood had taken a quick turn. The wind whispered with images that we hadn’t seen ourselves, but had felt in the core of our beings. “Maybe we should call the police and give them a heads up”, our beautiful leading lady was the first to speak. I nodded and made the call. I started with 3-1-1. “Hello, I’m on Tremont Street and we’re staging a scene that requires toy guns. The guns are completely fake, but they look very real. And we’re Black.” The operator was a sista, I could tell by the inflection in her voice and her immediate understanding, “Please hold.” When she returned on the line she directed me to call 9-1-1- and ask to speak to the west side’s commanding sergeant.  The cast and crew were watching me now. I called 9-1-1 and followed the instructions. “What’s the nature of your concern?” A brotha this time. I repeated the same line as before. “Okay, we’ll have the sergeant call you back.” 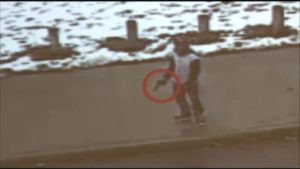 Cast and crew were laughing again. Their concerns assuaged, they were more interested in the bagel and coffee run I was about to take. But my stomach was in knots. Here we were, Black and free, unapologetic artists and educators who had to question if the plastic in our hands could cause our immediate demise.  This plastic could result in bullets and blood and the question everyone would ask is, “Didn’t they know better?”

I sped to the bagel spot (black owned of course). Smiled politely as the lone clerk struggled to fulfill our large order. My phone buzzed. It was an emergency number. No brotha or sista this time, a straight toned sergeant listened as I repeated myself for the third time. This time I didn’t say I was black. I let the timbre of my voice and the need to make this call say it for me. “I would strongly caution you against that.”

“I know, that’s why we’re proactively calling you beforehand so there won’t be any confusion.”

He sighed. “Do you have to shoot that scene?”

“It’s still photography, we don’t need one.” (A little black lie to cover the one detail I had forgotten)

“I don’t know about that, but again I would caution you against it.”

“That’s why were calling you. So you can let the officers in that area know that the guns are absolute fakes, plastic, toys.”

“I will. But I have to tell you again, I caution you against this. With the way things are in all.” 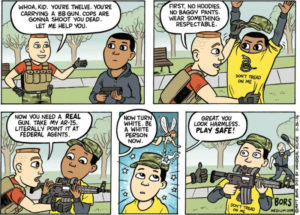 My breath caught. How are things? He sounded tired on the other end, weary. I was weary too and so I didn’t ask him to clarify exactly how things are. I wasn’t ready to hear his response. Plus, I didn’t want to exasperate him, I needed him to act as an ally and potentially save our lives. I hung up and I rushed the bagel chick and I flew like a bat outta hell.

The cast was cooling when I got back. We all happily ate in the sunshine and smiled at each other and affirmed our right to be.  And we shot that scene, in rapid speed, and we wrapped at that location and I said a prayer. Lord, please don’t let this be how things always are.