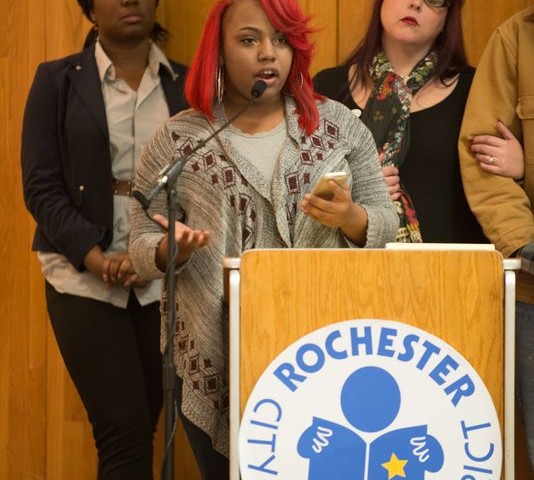 Warm-Up Question: What exactly do Black students learn from Black teachers? Comment below this blog with your answer.

I’m a teacher at heart. I love to share information and I love to help. Sometimes too much. My husband has to constantly remind me to mind my own business. It’s interesting though because sometimes when I don’t want to teach, I end up teaching anyway, and those are my best moments.

That’s what happened with Radazia. I met her in the field, because she’s a youth organizer with Teen Empowerment (TE). http://www.teenempowerment.org/rochester.html TE uses an interactive process that helps youth organizers (14-22) to unpack their feelings and experiences to understand the historical, political, and social roots of their daily lives. More importantly, TE equips the kids to do something about it—creating warriors, leaders, and change agents. They work with real kids, not just the nerdy and articulate ones that are often paraded in urban districts. (I know I used to one of those nerdy kids).

Now before I go on, let me stop to be real. I love teaching. I love kids and I love my people. I’m also an African snob and some shit just rubs me the wrong way. Like I said, TE works with real kids and I found some of them to be real sloppy. Like if you want your voice to be heard, then you need to package it properly. But sometimes I wonder if I’m being an elitist, if I’m kowtowing to respectability politics. If someone ignores a voice because it’s slouched or crouched over a cell phone, would they have heard it under different circumstances anyway? But then I say, nah! We need to prepare our kids for the real world and in the real world appearances matter.

So yeah, when I first met Radezia she got on my nerves. She attended community task force and code of conduct meetings, but stayed on her phone most of the time. When she did contribute to the conversation, I found her comments to be random, simple. Then one day I was asked to give her a ride home and I saw her, like really saw her, for the first time. As soon as she hopped in the whip, she asked me if she could read me a poem. I was tired and preoccupied, but her enthusiasm touched me. She didn’t really know me, what made her want to share her writing? So I said, “sure” and the poem was good. She read two more and didn’t want to get out of the car so I took her to my next meeting with me. A few days later, we learned that we have the same last name. Now this isn’t remarkable really,  McCullough is a common name (especially in Rochester), but it gave us a connection and we started calling each other cousin. You know how we do, the fictive kinships Dr. De Gruy talks about in Post Traumatic Slave Disorder.

Let me stop again for a second, I have dozens of kids. Dozens of students who gravitated to me and starting calling me mom, or some form of the word and dozen of kids who have traits that I would want in my own children so I call them son or daughter and treat them like mine. I said I’m an African snob, right? So that treatment is often tough. To this day, my father still sends my siblings and I a quarterly text, “thanks for keeping the name clean.” That is important to me. My name means something and whatever I put it on better be on point, kids included. So once me and Radezia started claiming each other, I made it my business to look out for her.

Now this is more than spending money. Truthfully, I’ve never spent that much money on students. That’s a simple trick that rookie teachers often fall for. Don’t get me wrong, when I see a need I address it. We can’t feed the spirit without feeding the flesh, right? But I’m trying to teach my students how to fish out here. It’s my retirement plan really. I pour into them so they can be financially stable. Shit, I might need a few dollars in the future. So I’m hard on them. Love is correction and I push them to be their best selves.

Radezia took my pushing well. She stepped up. She became more attentive at meetings, more assertive. The poignancy of her words became more pronounced. Her speech detailing the necessity for a new code of conduct was one of the stand out moments from the last school board meeting. She’s talented, she’s gifted, and she’s awake.