Black & White Lash and the Power of the Black Teacher

It does no good to tell somebody what to think. It does little more to try to coerce them into adopting your view. Yet, connecting truth to self-interest is a combination that only fools resist.

Guiding Question: What role do Black teachers play in politics? What’s the best way for us to stay informed and to inform?

Black Teacher Chronicles had been suspended, on hiatus or whatever. I had convinced myself that I had higher priorities, not enough time to spin the power, joy, and sorrow of the Black teacher’s role into a comprehensible web that also fits the gloss and frame of today’s blogsphere.
I thought this and turned my efforts to other endeavors, mainly a harrowing attempt at education reform, fulfilling experimentation with film, self-exploration, and foundation building via strategic planning and social media marketing. Yet, as the election raged on and spat out a winner like cats with hairballs, it’s all the more apparent that we need to get back to the fundamental—reading—and the critical thinking it evokes. So I’ve rededicated myself to my pen and to this space.

The historians amongst us are well acquainted with the cyclical nature of Black oppression in this country. Slight racial progression is always followed by retaliation (both brute and insidious): Slavery  > reconstruction > Jim Crow > Civil Rights >  mass incarceration > Obama years> make America great again. On the personal, I experience white lash almost daily. Community groundswell forced acknowledgement of racism within the public school system, officials perform the elaborate dance of pandering and professing progress while the power within that system folds its arms and plants its feet. Their criticisms are coded, their stall tactics ingenuous.  The Van Jones amongst us are challenged to prove it and our energy is sapped in creating charts, graphs, and reports that probably won’t be read and won’t be believed unless the author is white. On the national landscape, white lash is in swastikas, Klan garb, spur of hate crimes, rising private prison stock, and the renewed strut of the bigots. I won’t waste anymore words on that. 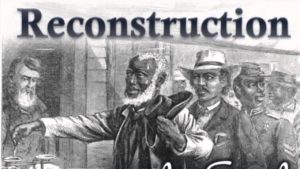 Let’s talk about Black lash. Black lash flexed its muscles too. Black women held Hillary down, while Black men let Democrats know their votes must be earned, and some of us decided that there was more power in not voting. My people need to be built up, so I won’t go in on what I think about that, though Awesomely Luvvie did so beautifully.

Here’s where Black teachers come in. Our people are hurting, they are hungry, they are moving, though some of their actions are misguided. What’s the needed balm here? Education. We need to be thoroughly informed, not just regurgitating the trendy rhetoric of the day. Nobody can teach us like us so Black teachers need to roll up our sleeves and get to it. This teaching of course it not limited to classrooms, but permeates our day to day interactions and commitment to information sharing.

In regard to this election, I can admit that I failed. I just unfollowed or unfriended the super woke or dumb deep that trumpeted not voting as if they’re really about this radical life, as if they’re smarter than Huey P. or Elaine Brown or Fred Hampton gunned down in his sleep, like they will really give up their comforts, or throw a fist, let alone a grenade if it came down to it. I’m not one for virtual arguments, any arguments for that matter, and I was exhausted with the fight that is my day to day. But the truth is exhaustion is a luxury that we can’t afford. No doubt, the result of this election is not on Black people, but we do have the most to lose, well maybe not more than immigrants and Muslims (though some Black folks are immigrants and/or Muslim). Perhaps that’s a beacon of progress? Isn’t the American Dream scrambling to have somebody on the bottom besides you?

Black Teacher Chronicles is not meant to theorize, or generalize, but rather to share first person accounts, so let me do so now:

In early October I found myself in a conversation with one of these “I’m writing a name in on the ballot” folks. He’s an owner of a construction business who I know to be diligently chipping away at New York State’s Minority Women Business Enterprise (MWBE) application. MWBE mandates that thirty percent of state contracts go to minority and/or women owned businesses. So I asked him a few questions. “How is your application going? You know how MWBE started, right? Its state interpretation of federal law ushered in with Civil Rights legislation, meant to give Black business owners a fair shake. Other underrepresented groups have benefited, mainly women. Still, a lot of people don’t realize that these Civil Rights are not permanent. Some have already been reversed or dismantled by the Supreme Court, like the Voting Rights Act and affirmative action. Do you know that there is a Supreme Court vacancy that the next president will appoint someone to fill, shifting the court to either left to right? Do you understand why people are contending that any vote not for Hillary is a vote for Trump? Not only does she need to win, she needs to win big to quell the growth of Trump’s exclusionary platform amongst other Republicans, including the Senate which has to approve the Supreme Court appointment. MWBE could very well be gone before you finish your application. You still gonna write a name in?” His answer was no.

That business owner is my husband and the tactic I employed is similar to what wives around the globe use. It’s also a tactic that the best teachers have mastered. It does no good to tell somebody what to think. It does little more to try to coerce them into adopting your view. Yet, connecting truth to self-interest is a combination that only fools resist.

Black teachers, we are needed like never before. We must uplift and teach each other, share what we know and all that we don’t and together pursue narrowing that gap. We must share this process with our students, infect them with an unquenchable thirst to learn. We must connect knowledge to their interests and create an environment where that can bloom. We must preserve ourselves so that we have the energy to share information in every conversation and prepare our people toward effective collective action. That action may be within the political system, it may be in tearing that system apart, but best believe it’s dependent on the work of Black teachers.