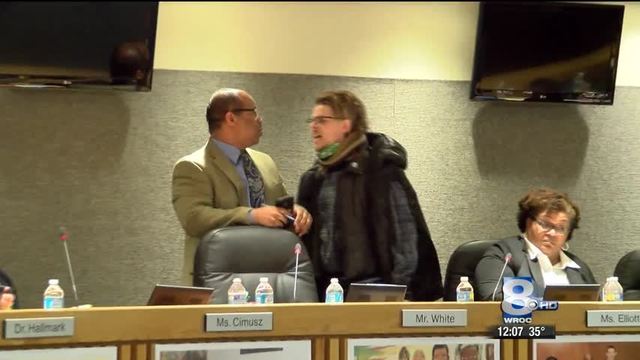 Warm-Up Question: What’s the most impactful urban education research released in the past year? Comment below this blog with your answer.

The worst a school is, the more likely its students will go to prison. This phenomenon is known as the school-to-prison pipeline, but it really isn’t phenomenal. It’s common sense really. The worst the school is, the more likely those students will be killed too, in a permanent state of poverty, and susceptible to all of the diseases and ills that come along with that. We’re talking life and death here. For some reason this very stark reality has recently cut through all of the noise and people are all over the country are mobilizing. We’ve started to understand all of the facets of “Black lives matter”.

In Rochester, activists and intellectuals gathered and released the data regarding our school-to-prison pipeline, a fine example of urban education research. Lots of conversations were had and a motley crew of community doers were put together, dubbed the “Community Task Force” (CTF), and tasked with breaking the cycle. Let me say that again, the purpose of the CTF is to severe Rochester’s school to prison pipeline. They had to agree on a lot, which systems and processes to implement, which theories and practices to adopt, and what to actually ask for. Near the beginning the then Superintendent (Vargas) gave his blessing, top level district officials joined the CTF, and everyone rolled around in the mud together, trying to figure out the best way to get clean.

Fast forward 18 months. A lot of people have come and gone, but there’s a good group of twenty that have seen this thing through. They have cried and they have yelled and they have cursed. They have stormed out and quit, but they always came back. A ninety-five page code of conduct was created and three complimentary proposals. Real friendships were made. Trust was built. The group started to shed its skepticism, started to smile more, embrace. “Maybe we actually did it…” They were building the courage to believe. The interim superintendent came to the table and said she was with it too. It felt real.

Then the RTA (Rochester Teacher Association) contract came rambling through. It went to vote quickly, 98% of all teachers approved it. And of course all teachers want a raise (and some really deserve it, let me add. 3.6% is merely a cost of living adjustment), but a few took notice and objection to this clause: “Crimes committed in schools will be pursued as crimes committed elsewhere, to the extent the district has the right to press charges for those crimes. In all other events, the district will fully support the teacher who chooses to press charges on his/her behalf.”

The whole Community Task Force balked at this language. This one clause was a direct contradiction to all they had toiled for. “A slap in the face”, it’s been called. Okay, so let me take a second to talk about courage. Some kind of backlash is expected for standing up and doing what’s right. When that backlash comes from your opposition is manageable, a badge of honor even. But what about when it comes from your own? Most of the members of the CTF represent a bigger organization, following, constituency if you will. And most of whom they’re repping think they’re foolish to give their time and energy in this way. “It’s just more of the same ol’”; “The district is the district”; “We’ve seen these task forces come and go.” Others have faced worse. They’ve been called “scab”, “traitor”, “Uncle Tom”. Elections are in the balance, budgets. Sacrifices have been made in the name of diplomacy, compromise—progress.  Two sentences stood to wash that all away.

There was hope still though because the RTA contract had to face board approval. Last night, the board sat in apt attention as students, mothers, and even a teacher poured their hearts out and damn near begged them not to pass the contract with that clause. Then there was a presentation from some academics about a science program that is only available in one school and is supposedly very engaging and effective, but there were no students or parents from said science project there to vouch for it. More formalities. Resolutions and reports and finally the moment the now tense crowd had been waiting for. The vote. Two dissenters. The two the community can count on to speak for them explained why they were voting the contract down. One was fiery, the other diplomatic, both questioned why the RTA would “fire a missile directly at the community.”

The other board members began to explain why they were voting yes. The crowd murmured. My leg shook, my husband placed his hand on mine to calm me. Shouts from the crowd now. A woman leapt up, “What the fuck do y’all mean?” Banging gavel until a white dude from the crowd rushed up onto the elevated platform and stalked back and forth behind the board. “I heard y’all trying to send kids to jail. I’m not going anywhere until y’all vote no!” He grabbed the gavel out of the board president’s hand, threw it into the crowd.  Cursed in the face of another board member. “What the fuck are you looking at? I work here and I’m sick of this shit. I’m sick of seeing this every day.  Y’all need to vote no!” When security approached him, he yelled, “touch me and I will sue the shit out of you.” They didn’t touch him. The crowd was on its feet cheering him on, but no one joined him.  Their blackness didn’t afford them the luxury. He went back to his seat and the meeting went on. The contract was quickly voted in, 5 to 2.

Singing from the crowd now as most of the board quickly filed out with security on their heels, “Which side are you on? Which side are you on?” The gift and the curse with me is that it’s never that simple. My temper is a slow fuse and I can see all sides of a situation. My work depends on my crossover appeal. This is a fact that would have mortified me a few months ago, but it’s a fact that serves me and the people I serve.

So make sure you pay close attention now. Are you listening? This is not business as usual. This is about more than the vote, more than the schools, more than the prison pipeline. I understand this contract was negotiated vigorously and this one clause was essentially a bone thrown to the RTA, that supposedly the new code of conduct will supersede it anyway. We’re talking about two sentences. But if the two sentences don’t mean anything, why leave them there? I understand diplomacy and I understand politics. Who you cater to the most indicates who you believe has the most power.

People are hurt. Do you hear me? HURT. It feels like y’all don’t understand what our pain looks like. Or care.  Our pain is hot. Of course it is, it has simmered for generations. It sears when you touch it, but it sanitizes and purifies too. But y’all don’t wanna go down that road with us.  For you it’s optional. The most well meaning of white liberals can decide to stop and that’s it. What do you do when this struggle, this pain, is embedded in your DNA? What do you do when you can’t move? When these schools are the only option? So you come and you pour your heart out. You trust these people again to listen and they still don’t. What happens then?

So it seems like the RTA, a union of about 3200 current teachers has more power than the approximate 30,000 students it serves and their families. Whose fault is that? No, really I’m asking and let me ask you another question while I’m at it, what would those 30,000 families have to do to make you respect their power? You better think long. This is a powerkeg situation and y’all ain’t smelling the dynamite.