My Teacher Taught me that Students Do Not Fail

Guiding Question: What is the most important lesson for every educator to embrace?Please comment below to share your response.

My Teacher Taught me that Students Do Not Fail

The title of the following blog is two-fold. It was written by Jason Muhammad, an amazing educator, who taught me African-American literature at John Marshall High; which deepened my love of Black people and my commitment to contribute to our quest for equality. Jason Muhammad continues to teach students and teachers alike in his current capacity as an assistant principal. Please enjoy:

One day I was in the cafeteria monitoring breakfast when I saw one of my students sitting with another. I had received a negative report on him the previous day, so I approached them and immediately went in:

“Excuses are tools of the incompetent, used to build monumental nothingness. Those who use them seldom amount to anything. I will not let you amount to nothing! I am going to force you to become great! And if you are mad at me because I want you to be great, I really don’t give a damn!”

And as I started to walk away, I heard his friend say to him, “He talks like he’s your dad.” And the boy shook his head and replied, “I know.” And his friend, instead of mocking, or snickering, or dismissing; instead of sucking his teeth, or waving his hand; instead of saying FOH; he shook his head in agreement and had the ironic look of one who had animosity-free jealousy for a friend. 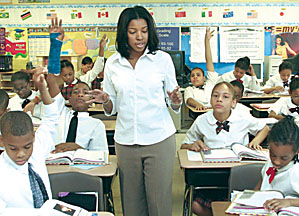 I use this example to demonstrate that when sincere educators act out of love, sincerely fighting to not fail in their duty to offer the Truth in the form of guidance and instruction, Black children accept these as gifts and move out with confidence to meet and overcome societal obstacles as men and women of character and substance.

My Teacher taught me that students do not fail – teachers do.

That is not a popular statement to make. And in 2016, saying this to a teacher or a group of teachers is eerily similar to telling a police officer or gang of police officers that “Black Lives Matter.”

But just as in matters of Race and Politics, Truth has become a casualty on the battlefield of education for our children. So this generation of Black students has become increasingly disinterested in school, just as they have become disinterested in church, politics, and the established standards and protocols of those who claim to be authority.

I know that sincere educators fight to never fail in their duty and responsibility to teach Black children the Truth that will set them free, motivating and inspiring them to Achieve what they will. But the key ingredient to this is the Love of Self and the Love of and for Black people. And love cannot be taught. Or mandated.

The simple Truth is that most educators who fail in their duty are those who egregiously mistake pity for love, thinking that the power and ability of the latter can be presented as strategies and tactics that can be captured and “turn-keyed” in a professional development seminar in order to give effectiveness to the former.

But the inevitable results prove the irrefutable distinction. Pity manifests itself in the educator who knows a child “has it rough at home.” So their instructional response is to keep things easy – there is no need to make things worse. So the child is babied, undisturbed, or left to sleep.

And some have successfully argued that the home environments of some children do not allow them to close their eyes and peacefully rest at night, and the first chance they get to close their eyes is within the safety of the school environment. And though this point really cannot be contested as we see the conditions of the neighborhoods where we live, sincere educators know and understand that this is not where we stop, but rather where we start.

But as an educator, we must ask the question: Now what? By what means does a child find the door to the cage in which his family has been pacing back and forth for innumerable years? Only the proper acquisition of Knowledge will empower our children to move through the socially engineered conditions in which we find ourselves. Without it, our children are relegated to perpetuating the spiral of limited progress and opportunity.

So, pity is never a viable option.